The Deadly Demon Bay Bash is a modular adventure for Enter the Beast Trinity, the animal folk fighting fantasy game created by The Dice. Enter the Beast Trinity draws a lot of inspiration from fighting games like Street Fighter, Mortal Kombat and Tekken. The Deadly Demon Bay Bash injects some beat-em-up influence into its narrative and focuses in on a specific Reaper domain; Demon Bay, overseen by Boss Beleth.

Tonight, the Beast Warriors of the Worldport will do battle on the streets of Demon Bay. Demon Bay is a place forever drenched in night, where no one can ever sleep. Beleth commands their syndicate of demons to punish the souls of the damned.

Various Beast Trinities will be dropped on the streets of Demon Bay and must make their way to the Poison Pier for a final battle between two teams. But Beleth won’t let these teams through unless they’ve suffered appropriately. Every demon in the Bay has gotten the word: stop a Beast Warrior making it to the Pier and be rewarded.

You’ll need to scrap and claw your way through the mean streets of Demon Bay. Make it to the Pier for the final showdown. Triumph here and earn your freedom. Fail and you’ll continue to toil away in the King of Beast Trinity Championship.

This adventure includes three pre-written trios for you to chose from, pulling from different eras and warrior archetypes (including the two newly released Warrior Playbooks; the Viking and the Gunfighter). These characters include a write up explaining the backstory, relevant stats and their default starting weapon.

Other new content in this adventure includes more detailed areas across Demon Bay (for both Battles and Downtime activities), some additional new weapons (a mix of alternative starting weapons from Demon Bay and a set of unique weapons with their own stories as rewards) and finally some new enemies - unique to Demon Bay – that better fit with the beat-em-up tone of the game. There is a page with suggestions of how to structure your Battles and Briefings. These are only suggestions, the material in this adventure can be remixed as you see fit and is compatible with material from the core Enter the Beast Trinity book.

Can I play this game without having read Enter the Beast Trinity?

Yes! This game re-produces most of the core rules from Enter the Beast Trinity within it's own text so you can read this adventure and be off to the races.

Material that you won’t find here includes the wider history of the Chimaer, material relating to the whole Consortium of Reapers, Worldport Downtime venues, details on Character Creation, rules for the use of Pole Stars and Arch Enemies, the Tales of Play and the large amount of commentary on the game. For this content you’ll need to check out Enter the Beast Trinity, available at https://thedice.itch.io/enter-the-beast-trinity

Enter the Beast Trinity and The Deadly Demon Bay Bash are both Illuminated by LUMEN, based on the LUMEN RPG system designed by Spencer Campbell, Gila RPGs. This game is in no way affiliated with Spencer Campbell or Gila RPGs.

Game Design and Layout by The Dice

In order to download this adventure module you must purchase it at or above the minimum price of $6.66 USD. You will get access to the following files:

Support this adventure module at or above a special price point to receive something exclusive.

If you're from a marginalise community or aren't able to pay full price feel free to claim a community copy. 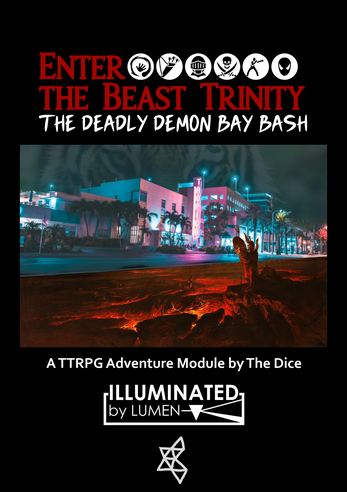