There came a time when the Old Gods died! The wild died with the weary! The magnificent perished, locked in battle with the unforgivable! It was the last day for them! An ancient era was passing in a Great Disaster!

Now in a world after theirs, young gunslingers carve out a living on the Meteoric Planes. Bounty hunters and bandits drifting through asteroid towns. Lawmen appointed by mining corps barons enforcing their iron grip. Labourers being pushed to breaking point ready to take destiny into their own hands. Preachers looking for legacies of Old Gods in the dust. Truth is the only reliable professions on the belt are undertakers and bartenders.

Old Gods and Young Guns is a marble-based story game. It is a game in dyad. It is a GMfull game for three to seven players. You will require a set of marbles (10-15 marbles which can be split in two and marbles to act as shooters) and somewhere to use them. You’ll also benefit from something to write on and something to write with.

In the first phase of the game, The Time of the Old Gods, you play a game of marbles which you use to define the Cosmic and Chthonic Gods, doomed gods inspired by the work of Jack Kirby. You tell their story and leave behind the world you’ll play in during the second phase of the game.

The second phase of the game, The Dangerous Lives of the Young Guns, uses the marbles you scored in the first face to make an asymmetric token system. You play gunslingers living in the Meteoric Planes, the devasted remains of the Old Gods’ world, who wield dangerous weapons containing the power of the Old Gods.

The game was initially conceived of for one-shot play, however it may work as a short campaign of multiple sessions, depending on your session length preferences.

Get your shooter ready.

If you’re a fascist, you’re not welcome to play this game. It’s against the rules. If you’re reading this and thinking, “You just call everyone you disagree with a fascist,” then you’re probably a fascist, or incapable of drawing inferences from context and acknowledging a dangerous political climate that causes the oppressed to be hyperbolic. Don’t play this game. Heal yourself. Grow. Learn. Watch some Mr. Rogers’ Neighborhood or something.

A Storygame by The Dice

Old Gods and Young Guns is a game that fundamentally involves violence and is likely to involve violence between player characters. The Time of the Old Gods phase deals with the death of the characters you create. The exact form this takes and the detail of such is player-controlled, be considerate of each other and understanding as you find the level you’re all comfortable with.

The Dangerous Lives of the Young Guns phase is a essentially space western. The western genre is soaked with racism and misogyny, be thoughtful of the tropes you deploy in your game and how else you can avoid replicating this hate.

Engaging with the western genre means engaging with this and engaging with the genre’s relationship with settler colonialism. Settler colonialism enacts and perpetuates generations of injustice and cruelty. The setting of the game is a science fantasy setting that does not have a relationship to the history of Earth. We did not create sci-fi/fantasy analogues of Indigenous people and cultures as that is not something we felt comfortable or even qualified to do, as a white designer. This does mean however we’ve written a western setting without Indigenous peoples. That gives us pause. It is worth thinking about how this can affect your experience of play and how best to be kind and patient with each other.

In order to download this storygame you must purchase it at or above the minimum price of $10 USD. You will get access to the following files:

Support this storygame at or above a special price point to receive something exclusive.

If you're from a marginalised community or aren't able to pay full price feel free to claim a community copy. 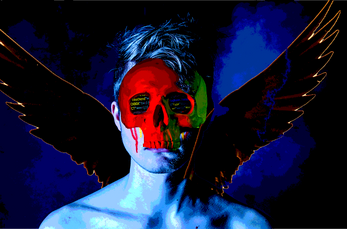